Men in Black 3 is a completely unnecessary installment of a dormant franchise that, to my knowledge, didn’t have a large outcry to get rebooted. And in a summer filled with blockbusters like The Avengers, Prometheus and The Dark Knight Rises, it’s ultimately a film that isn’t flashy enough or epic enough to stand out amongst the rest. But it is a perfectly serviceable and enjoyable little film that should leave Men in Black fans satisfied and entertained.

The film opens with Boris the Animal (Jemaine Clement), a deadly alien that Agent K (Tommy Lee Jones) locked away in a moon prison 40 years ago. Boris uses his newfound freedom to travel back in time to 1969 to kill a young Agent K (James Brolin) before he captures Boris. Once the timeline is altered, K’s partner Agent J (Will Smith) is the only person who remembers the way things originally were, which makes him the only person who can travel back to put right what once went wrong.

Adding time travel to the mix is a fun way to shake things up in a franchise in need of something new. Showing us how the Men in Black organization operated in the 1960s provides some solid laughs, especially when showing the not-very-sleek 60s version of the infamous MIB neuralizer, the “flashy thingy” the erases short-term memory. The film also has some fun with Agent J traveling back to an era when a black man with a suit was treated with suspicion and contempt. Also, the final act has some fun with the nature of time travel and the unintended consequences that can occur when you start messing with the past.

The film’s most inventive creation is Griffin (Michael Stuhlbarg), an alien who is able to see all possible futures at once. Griffin is an interesting addition to the time travel genre. He knows what is about to happen at all times, but he’s not omniscient. He knows the possible outcomes of any given situation without actually knowing which timeline he’s in. This means that he’s full of more useless information that useless info and he’s occasionally so fixated on what might happen that he misses what is happening. Stuhlbarg plays the role with a lot of charisma and gives Griffin an air of mystery that left me wanting to know a lot more about and see a lot more of Griff. 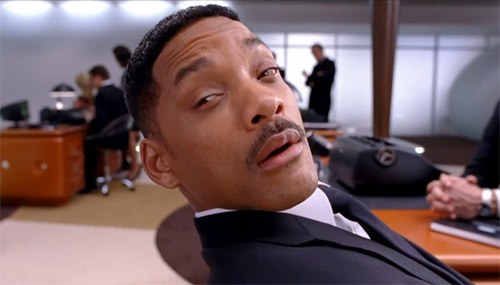 As good as Stuhlbarg is though, the newcomer that truly steals this film is Josh Brolin as a young Agent K. Not only does Brolin do a pitch perfect impression of Tommy Lee Jones, but he injects a playfulness and charm to the role that makes K a joy to watch. The older K is a sourpuss foil to Will Smith’s boisterous Agent J, but the younger K hasn’t yet been beaten down by the weight of saving the world week after week, so he’s a much happier and more outgoing guy. Brolin is great and Smith does a good job showing J’s confusion over who his longtime partner used to be and what it is that made him into the man he is today.

While Brolin is great, fans of Jones may be surprised by how little screen time the original Agent K has. Jones is there in the beginning of the film to set up the action, but the bulk of the story takes place back in 1969. I’m not sure if the time travel storyline and Brolin’s involvement came to be because Jones only expressed an interest in briefly appearing in the film, but whatever the case it was a bit surprising to see how little Jones is involved. The trailers and promotional material have featured him quite prominently, so you may be disappointed that his role amounts to little more than a glorified cameo.

Will Smith hasn’t lost a step as Agent J. Also, surprisingly, he seems to have not aged since the original Men in Black in 1997. Jemaine Clement of Flight of the Conchords fan has a really fun hammy performance as Boris the Animal. And Emma Thompson is enjoyable as Agent O, the new woman in charge of MIB.

The most surprising element to me was the film’s use of 3D. I am not a fan of 3D and am often disappointed to attend screening that force me to wear those bulky glasses in order to watch a 2D film that was lazily converted in post production to 3D. Men in Black 3, however, is not one of those films. It’s clear that Barry Sonnenfeld conceived this film from day one to be shot in 3D and he gives audiences quite a few fun sequences that take advantage of the technology. It’s still not my particular cup of tea, but I will say that this movie had some of the best 3D sequences I’ve seen to date. So if it is something you enjoy, you won’t be disappointed.

If you are a Men in Black fan hungry for another installment (and you are okay with Brolin essentially replacing Jones as Agent K), I recommend seeing this one in the theater. It won’t change your life and, chances are, it won’t linger with you long after you leave the theater, but it will keep you entertained. 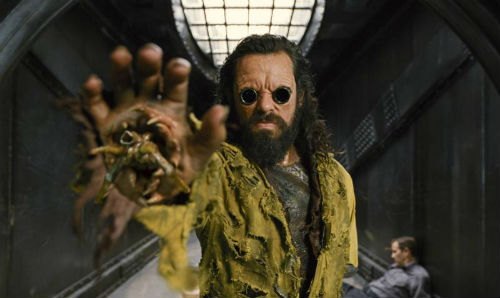