The final season of Dexter is upon us. My second favorite part of this show is the psychology behind Dexter’s psychopathic behavior. So he is this lovable character who you root for despite the fact that he’s chopping people into tiny bits, and that’s the gimmick of the show. Right? But that’s not what I’m referring to. I’m talking about the anti-social, emotionally confused, but always willing to try, elements of his psychopathy.

Something about broken characters just make you love them so much more. And he’s always trying to figure out human emotion. If you’re an avid Dexter watcher, you know that one of the very clear ways in which he does this is by bringing donuts to his co-workers in the morning. He thinks it makes him seem normal and friendly. Now I’m starting to wonder if my co-workers suspect I’m a psychopath since I bring in baked goods on a weekly basis.

Regardless, they’ll be eating this recipe. I present to you, the Dexter Morgan special, in collaboration with Sadie’s Donuts: Dexter’s Blood-Spattered Donuts.

And in case you were curious, my first favorite part of the show is Michael C. Hall. But that was probably obvious. 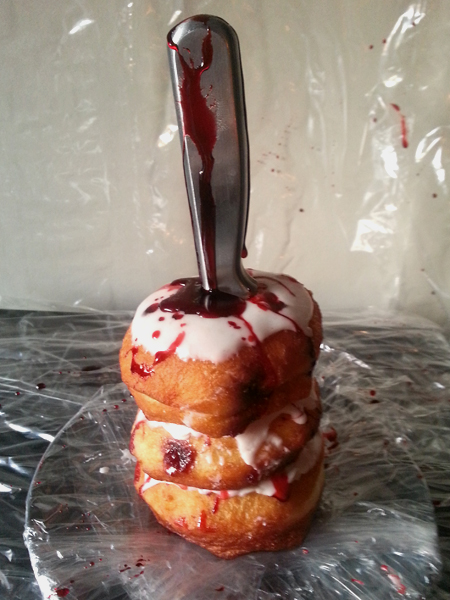 * If you’d like to make the jelly donuts from scratch, rather than using the biscuit-shortcut method, a great recipe to try is Emeril Lagasse’s.

Heat your oil in a pot over medium heat. (You can use a deep fryer if you’re fancy like that.)

Test your oil by dropping a little pinch of flour to it. If it sizzles, you’re good to go. Drop in your biscuits one at a time (don’t overcrowd). They’ll only need to be in for a couple minutes. When a pretty golden brown, flip them. After the other side is cooked, remove them to a plate lined with paper towels. Repeat until everything is fried. EVERYTHING IS FRIED!

While they are cooling, prepare your other shit.

In a mixing bowl, combine cream cheese and milk. Beat with a mixer until combined. Add in your powdered sugar, one cup at a time, until incorporated. Icing shouldn’t be too thick because you’ll be dipping the donuts. If it’s getting too thick, you don’t have to continue adding the sugar. Lick your beaters. 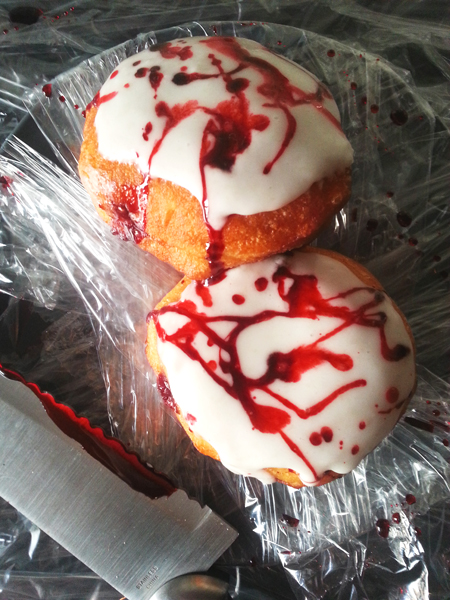 Get out a tiny bowl for your blood. Dye your corn syrup with red food dye until it looks like blood.

Alright, time to make the donuts. Set up your pastry bag with a standard tip. Fill your bag with jam. Stick it in your donut and squeeze. You’re gonna aim to pump about two tbsp in there. You’ll feel it get a little firm as it fills. Repeat until all your shit is filled.

Dip all them guys in your cream cheese icing.

Now shit’s about to get strange. Place all your donuts side by side on a plate or platter. (Or two.) Take one corner of a paper towel and roll it up between your hands so its long, thin and firm … like you’re about to stick it up your nose. Dip it in the corn syrup and let it get good and soaked. Then fling it on your donuts. Repeat until you get a gruesome blood spattering across your donuts. (A knife could technically work for this, and I did try both, but the absorbancy of the paper towels is really ideal.)

Allow the icing to dry completely before stacking and storing.

To sum it up: fry your biscuits, inject them with jelly, dip them in frosting, spatter them in blood.

Take them into the office and pass them out to your coworkers because it’ll make you seem like a normal human being.