Sometimes, I relate to Roger Smith and his constant need to be someone else, be absolutely crazy and mostly to wear lots and lots of wigs.

Sometimes, I relate to Hailey Smith when I’m being annoyingly leftist and getting in people’s faces about their opinions (knowing full well I’m not able to change their minds).

Sometimes, I relate to Claus the fish, when I’m feeling underappreciated and trapped.

Sometimes, I relate to Steve Smith, when I’m nerding out with my friends and I think that no one else would be getting me at the moment.

The only time I EVER feel like Stan Smith is when he’s in the hot tub with Bullock … and that’s just in my fantasies because of the MAJOR crush I have on Sir Patrick Stewart.

But most of the time, I relate to Francine Smith. More often than not, she reminds me of me. I can’t even count the times that my husband has looked over at me with a knowing glance when she says something off-the-wall and kinda ditzy.

I think it’s safe to say, that despite the alien living in the attic, the Fabulous Thunderbirds fan living in the fishbowl and the countless episodes where they’ve died (I think from pretty early on, they’ve all been living out seemingly normal lives in Stan’s version of heaven), American Dad is shockingly relatable.

I knew Fox was going to cancel it. They moved it’s time slot to before the animation block. It wasn’t subtle or unexpected. I was not expecting TBS to pick it up. Granted, I haven’t been watching it since then, but I’m happy to know it exists. I’m one of those people that bitches and moans when a show gets canceled, but I never watch things live.

Having watched the show for years now, I’m kind of shocked I never did a theme recipe for it. It’s about time, right?

One of my favorite food episodes of American Dad (and believe me, there have been a lot) was called “Stan’s Food Restaurant.” The plot is simply that Stan wanted to open up a restaurant when he was a kid and Roger helps him to achieve that dream as an adult. Granted, his menu is all based off of his ideas he had as a child. I picked a couple of my favorites.

The Captain Crunch Vegetable Tempura actually turned out pretty damn good. Just a bit of sweet and crunch to something already crispy and delicious. I also added honey to the traditional tempura sauce just to add a bit more of sweetness.

The Chocolate Chip Meatballs were a little weirder. They actually aren’t bad by any means. I used sweet Italian sausage and turkey breakfast sausage so the flavor profile supports the chocolate. Then I topped it with a pretty legit honey goat cheese sauce that has nutmeg and cinnamon. (I also made some without chocolate chips and I’ll be repeating that recipe. Just omit the chips, if desired.) Definitely serve it up on a pancake plate like Stan requires.

Wait a minute, this is a food restaurant, we don’t serve salad. 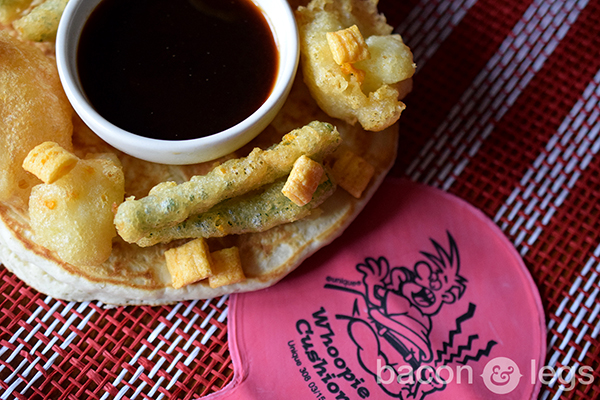 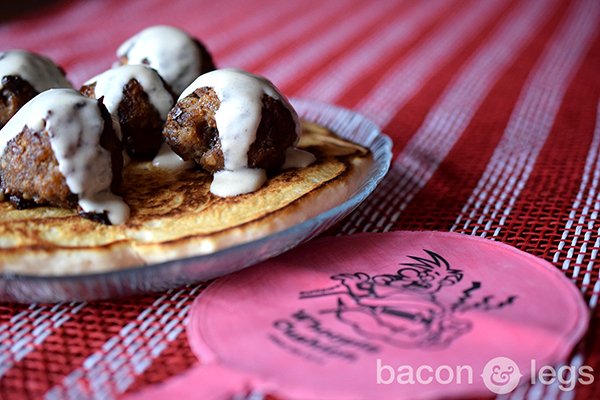