I don’t think this has escaped anyone … but, OMG guys: The Hobbit: the Battle of the Five Armies came out this week. This is mostly important because I get a second movie that combines my dragon fetish with wonderboy Benedict Cumberbatch.

I know that the Hobbit and the Lord of the Rings has been fanboyed and fangirled to death because before the films, there were the novels. The novels that have been amazing for over 70 years. So it was difficult to choose a theme recipe to commemorate such a grand occasion. There were plenty of puns to be had, but when it came down to it … I really wanted to do right by the classics. The FINAL film deserved a solid send off.

What’s more Tolkien than Lembas? Well Beorn might argue that Honey Cakes are … but that would be breaking the fourth wall and no one wants that out of an epic fantasy film trilogy. That’s what I’m here for. To get to the bottom of this debate once and for all. No elf/man-bear-pig fighting necessary.

Yes, there are tons of recipes for lembas online. Even some honey cake recipes. But I decided to give you my own interpretation of both.

The lembas is a simple salted flatbread. It is crispy right out of the oven and definitely fills your tummy. It’s fairly basic, nutritionally speaking. Not to mention it’s good enough that you eat more than you intended. Though I will say, the fresher it is, the better it tastes.

The honey cakes are essentially a honey-sweetened shortbread. While more of a dessert, it is still a simple food that is light on the tongue, but heavy in the tummy. It also travels a bit better than the lembas.

So what’s the verdict? I’d like for you to decide.

Is that a cop out? Maybe. If you’re really nice to me, I’ll tell you which recipe I think wins.

In a small bowl, pour the warm water over the yeast and sugar. Stir. Let set a few minutes or until foamy. Slowly work in flour, salt and butter. You may need to use your hands to fully incorporate ingredients. Once the dough is in ball form, place it back in the ball, cover with plastic wrap and a slightly damp kitchen towel and place it in a warm place for an hour to rise.

Flour your work surface and turn the dough out onto it. Knead for five minutes or so, or until the dough is stretchy. You can add more flour as you go if needed to work with. Return the dough ball to the bowl and cover/let rise another hour.

Repeat the last kneading process again. This time, instead of returning it to the bowl, dust a rolling pin with flour and roll out a rectangle, about ½ inch thick. Lube up a baking sheet with olive oil and place the dough on it. Let rise for two hours in a warm spot. (Do not cover.)

Meanwhile, arrange your oven racks so that one is in the middle and one is on the bottom. Place a pizza stone (or inverted baking sheet) on the bottom of the oven. Preheat the oven to 475° and leave on for 45 minutes before baking.

Using your fingertips, dimple the dough. Brush with olive oil and sprinkle with sea salt. Place the baking sheet on the pizza stone and bake until the bottom is golden brown (about 7 minutes). Transfer to the middle rack and continue baking another five minutes or until golden brown all over. Remove from the oven and immediately drizzle with additional olive oil and sprinkle with more salt. Let cool. Using a pizza cutter, cut the bread roughly into 2-inch squares.

Pack away in your elf pouch.

In a mixing bowl, combine flour and sugar. Cut in butter and honey until it looks like sand. Form the dough in a ball and knead until smooth. Place the ball on an ungreased baking sheet and flatten with your fingers until its oblong and a ½ inch thick. Bake for 10 minutes.

Let cool for five minutes. Cut into 2-inch squares separate on the baking sheet, about an inch apart. If you’d like, score little X’s on the top of each one.

Bake an additional 10 minutes, until the bottoms start to look golden brown. Remove to a cooling rack. 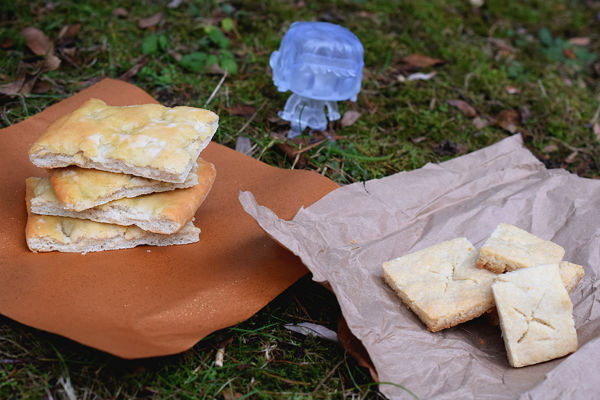