I tend to be very judgey and annoying. Ask anyone. One of the things I’m judgey about is media.

Oh, does that movie have Nicholas Cage in it? I am not wasting my time.

Oh, that show is on Fox? It’ll get cancelled before it has a chance.

Oh, that song came out within the last five years? It has absolutely no musical merit whatsover.

Oh, is that another movie based on another book series made for teens? Yeah, I bet it’s terrible.

I’m fucking insufferable. And a good percentage of the time, I’m wrong. And, surprisingly, happy to admit it. The Hunger Games was one of those times. I thought it was some dumb kid shit and I couldn’t be bothered. I ended up being coerced into watching the first movie, and it was all over. I watched the others. I read the books. (Except the last half of the last one, so as not to spoil the movie for myself.) Now that the last movie is coming out, I’d be remiss if I didn’t do a column on it.

Originally, I wanted to do something on the district breads. But it’s been done. Then I wanted to make Peeta bread. But no one needs a recipe for pitas. So, plugging into the romantic tension of the movie, I have made Love Triangles. They are one part Peeta (pita), one part Gale (kale) and one part Mockingjay (chicken poppers) with a little bit of goat cheese spread (made from Lady, Primrose’s goat). I made the mockingjay poppers sweet and fiery, just like Katniss.

Feel free to adjust the amount of heat if you like the them spicier or less spicy by exchanging sriracha for ketchup and vice versa. 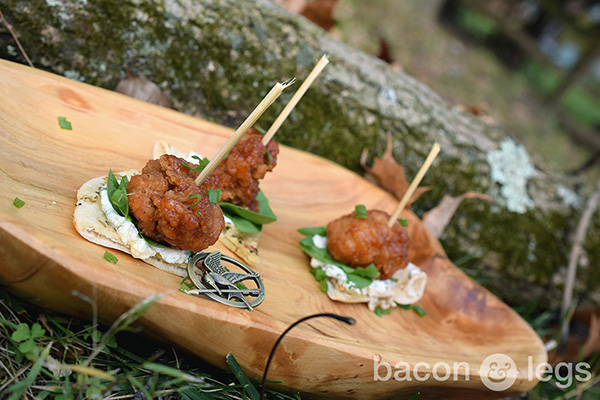 Print
The Hunger Games: Love Triangles
Author: Fontina Turner
Ingredients
For sweet & fiery mockingjay poppers
For goat cheese spread
For the other two parts of the love triangle
This recipe is perfect, but cut the chicken into smaller pieces. Or you can just buy a pound of fried boneless wings from your deli if you need a shortcut.
Instructions
3.4.3177 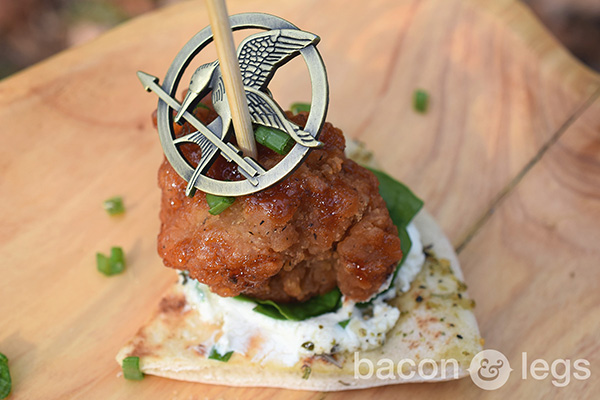